Merry ‘Statesmas! The Western States Endurance Run is the annual American ultra-running event. An epic and storied trail race that began in 1973 when Gordy Ainsleigh first toed the line as the only competitor not on horseback. Starting in Squaw Valley, near the site of the 19670 olympics, and ending 100.2 miles later in Auburn, CA, Western States has come to represent one of the ultimate endurance tests in the world.

In the week leading up to the race, I had the enormous privilege to participate in the Western States Google Trekker Project – an expedition led by Richard Bolt, of the American Trail Running Association, supported by ATRA corporate sponsors, and executed by volunteers. Just days before the Trekker project kicked off, I re-injured a metatarsal, leaving my trekking capabilities somewhat compromised. I emailed Richard and explained what had happened. I told him how much I had been looking forward to being involved in the expedition.I assured him that even in an orthopaedic boot, I would still be able to trek with  the best of ’em, and keep pace. Anyway, it worked out that I’d postpone my arrival til Monday evening, allowing me an additional couple days rest, and go in first-thing Monday morning to have some x-rays taken of the problem foot. The new x-rays assured that there was no  fresh break, and I was probably just experiencing an irritation of the recently bolstered bone fracture. My delay proved rather fortuitous when I was able to stop by Google to pick up a replacement battery charger for the Trekker camera, saving at least a day we’d have lost while waiting for the charger to arrive via FedEx. So, with x-ray films declaring me fit, replacement hardware to offer upon arrival, I made it to Foresthill!

The Placer County Visitor’s Bureau put us up in Foresthill’s Miner’s Camp. 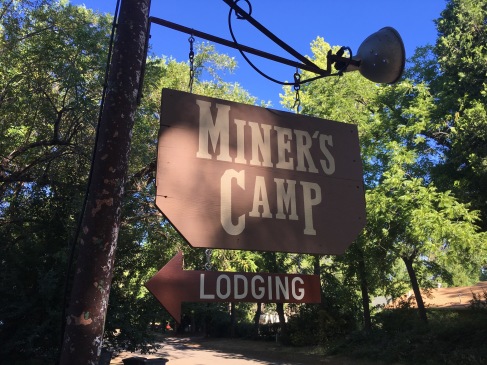 Once I was checked in, greeted, briefed, and rested, we rallied at Richard’s cabin at 0-dark-30 to get organized and onto site. One of the guiding principals of the expedition was the relatively short window of optimal daylight for our 360* photography. We started at around 6:30am most days, and shot until around 3 o’clock in the afternoon. Each day was it’s own adventure. Day one, of the project,Richard and the crew photographed Squaw Valley to Duncan Canyon. With an inoperational battery charger, Day 2 was a wash. I joined the party Tuesday (Day 3 of the expedition) for the section of trail between Duncan Canyon to Last Chance. 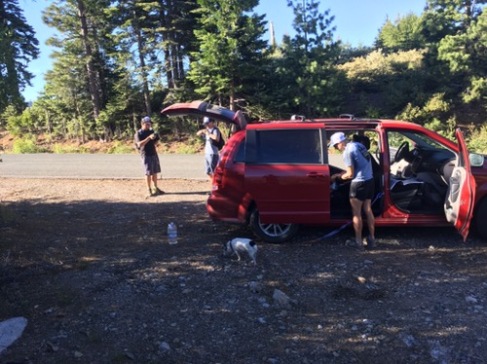 Tuesday morning, I loaded up with the guys and shuttled out to Duncan Canyon. After a quick gear-up, they were off, onto the trail! I stayed with the vehicle atthe drop off location for about an hour, before reversing the route to meet the trekkers – Richard Bolt, Mike Kreaden, Dan Baxley, Myke Hermsmeyer (photographer) – at the first aid location, Robinson Flat.

It only took 40 minutes or so to drive to Robinson Flat. I rolled in to park the red Dodge Caravan (the Cadillac of minivans!)  in a shady camp site by the trail where I suspected the trekkers would emerge from the wilderness. In the time I had until the team arrived, I put the skills I’ve picked up volunteering at all these aid stations recently. I prepped bladders for quick change-out, filled extra water bottles, adding vFuel electrolyte/calorie drink powder to some, and made a few peanut butter and honey sandwiches, in case any of the guys wanted to try to consume solid food. I met local who was doing some long term camping and we hiked around a bit. He showed me a few spots that the trail passes through the area and where I might get the best vantage for each one. I drove up the ridge to Duncan Peak to the fire-watch tower, where I could see the trail pass below in both directions,and waited. 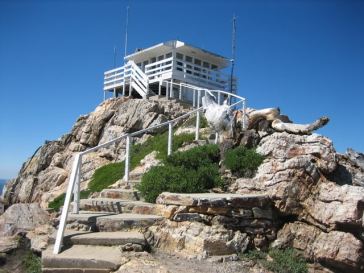 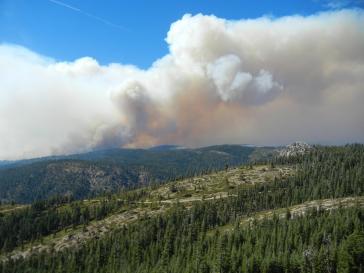 When the trekkers showed up, they were all business. They replenished their supplies, and pressed on, down the mountain. 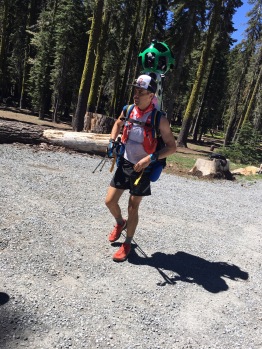 I said goodbye to the locals with whom I had struck acquaintance, and struck off myself. I wound my way back up toward Duncan Peak, reaching the fire road I had come in on. I used a combination of Gazetteer, Google Maps I had saved for offline use, and a lot of local beta I received from Mike Kreaden. With no problems navigating, I had lots of time to hang out between checkpoints/aid stations. Using a network of logging roads, I made my way to Miller’s Defeat (roughly, mile 34.4 of the trail). While I waited for the trekkers, I went through what became my routine of refilling bladders and bottles and laying out a selection of nutrition – Picky Bars, vFuel powders, Nutella sandwiches, trail mix, etc. During these breaks between the action, I would explore the area, read from one of the awesome trail running-related books with which Richard stocked the shuttle vehicle, and sometime when I was lucky enough, I’d meet cool trail-people. At Millers’ Defeat, I met the Western States Endurance Run’s Mounted Sweeps – group, on horseback, that trails behind the last runners of the race as a safety precaution. They were doing pretty much the same trail-splits we were, familiarizing themselves and their mounts with the trail’s diverse terrain. 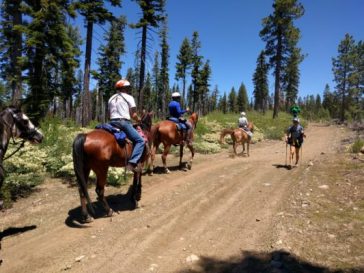 From Miller’s Defeat, the trail continues downhill to the next checkpoint, Dusty Corners (mile 38). There, I met more trail-folks. Two women in their seventies, keepers of the John Muir Trail. They told me a little of their background, and I shared a little of mine. When I described what the trekkers were doing, they reacted more strongly than anyone else had, yet! They were very resistant to the idea of someone photographing their home-trail. their argument for the case against, was that following media attention, the public’s attendance at state and national park increases. They don’t want more people in their park or on their trails. This is an argument I hear from a lot of older conservationists. I can’t help but understand the desire to keep these special places private and largely unknown, but doesn’t it make more sense that the greater number people who are made aware of the natural beauty surrounding them, the more people will lobby for conservation? Did Ansel Adams’s photographs do more harm than good? I even worked with some folks once who, while we were all vacationing in Mexico, didn’t feel the desire to visit ancient ruins  – wait for it – because they had seen a digital walkthrough. After eating lunch and sharing stories, the women began to pack up their vehicle. Pat asked me as she opened the driver’s-side door, what I had to share. I immediately understood what she meant – when crossing paths with fellow hikers or travelers, its customary to swap baubles – and I quickly retrieved a jar of cannabis-infused pain relieving salve. Pat gave me a map of one of her local park’s trail system and a coupon to a museum in her town. I thought this was a very cool custom, that I intend to adopt in the future. The ladies drove off, As the dust kicked up by their Subaru settled, the trekkers came charging down the hill with a mountain of momentum behind them. I collected empty bottles and distributed full ones; I pointed out snacks and discussed both the past, and the upcoming, segments with Richard, Mike and Dan.

I feel like I’m so far behind in getting this posted, that I want to publish this as the first half of a two-parter. Robert Rhodes returns and Ann Trason joins the crew as we hike the canyons section of the storied course. So please stay tuned for the second half of my week Trekking the Western States Trail!