My road-trip across the nation began about two weeks prior to the Badwater run. I left Santa Cruz and headed to Phoenix to drop our cat with the in-laws who, from their great benevolence offered to cat-sit. From Phoenix, I made for the remote ghost town-turned-absconders’-haven of Terlingua. 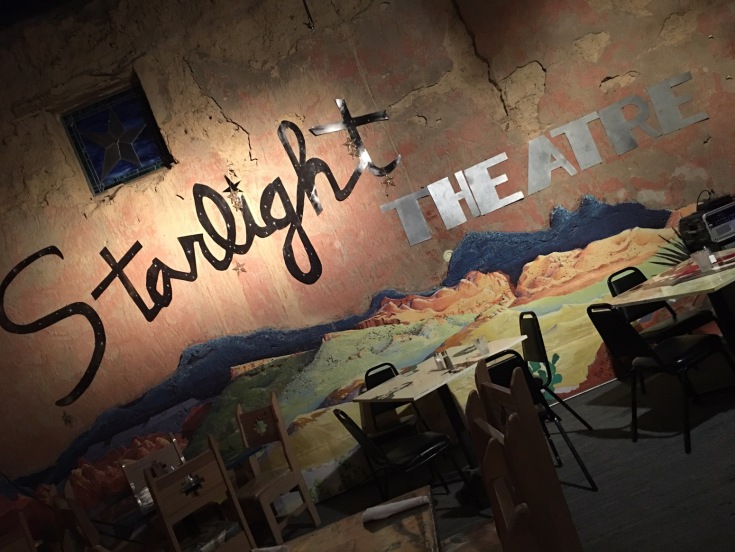 My welcome to Terlingua was memorable. The Steves – Campbell and Brenner, were right where I expected to find them – on the patio of the Starlight Theater, a onetime movie palace currently offering innovative Texan eats, live music, mural-covered-walls, equally colorful locals, and a stained and desert-dust covered ABC license. Following a hearty and well met greeting they ushered me inside and introduced me around to all the drifters, drunks, and river guides they felt I needed to know. I admit I was pretty travel-weary and struggling to keep up with their alcohol-lubed exuberance. With first impressions out of the way, I retired to a quiet disused section of patio and toked on a hand-rolled CannaBam Kush (Master Kush X Mystery Strain) and regaled some dear new friends with my tales of far off and far out California and my travels across the south of the country. After I convincingly qualified myself to the fat-chewers and yarn-spinners, I called it a night. I walked back to the campsite next to the submarine tower and pirate ship and laid out my bedroll right out on the desert floor. I felt swaddled by the age-old solidity of the sandstone desert floor – sheltered and protected from the oppressive crushing expanse of the southwestern sky and all it’s heavenly bodies.

I awoke rested and strong to my first Chihuahuan sunrise and my first glimpse of Big Bend National Park, West Texas. 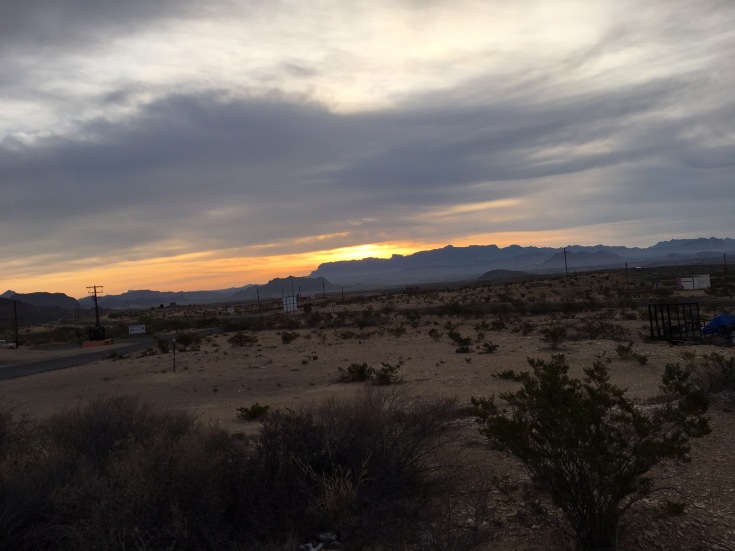 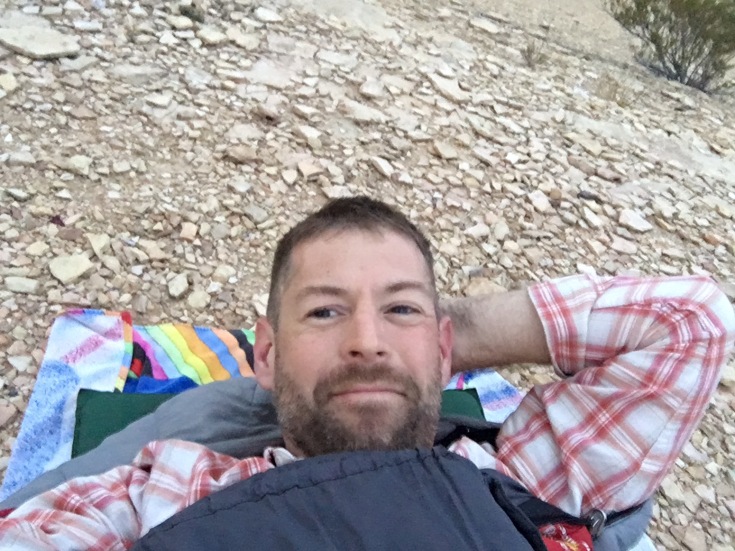 “What price freedom / Dirt is my rug / I sleep like a baby with the snakes and the bugs.” — Tom Waits, Cold Water

With the sun rising I meditated. Once the orb was above the horizon, I stretched and PT’d, and Jetboiled some eggs and coffee. I chose to augment my morning with Purple Diesel’s (Pre-98 Bubba Kush X Sour Diesel) effects, which are similar to most sativas – energizing, uplifting, and focused. However, less well known is that it is also an exceptional strain for pain relief. This strain takes a while to fully kick in – to ease the arthritic stiffness I experience so acutely during travel. However, once the effects begin to present themselves, I’m struck by a type of giggly, euphoric bliss. A favorite among daytime strains, Purple Diesel makes quick work of tightened ligaments, inflamed joints, and the odd negative thought. My solo ritual and lonely ruminations filled the short time between dawn and muster – I patiently waited for The Steves to rouse. Brenner was traveling in style, camping in a 20′-ish RV, but Campbell and I rely on the likes of a Tudor’s Biscuit World, the odd Walmart, or a small-town coffeeshop for our indoor plumbing, so we left Brenner to his mobile suite’s kitchenette and struck out from camp toward town proper. Fortunately, Terlingua is less of a ghost town than I expected, with a market, at least two restaurants, and a legit cafe – La Posada Milagro.

Campbell and I took our (my second) breakfast and espresso with a motley assortment of adventurous Texan spring-breakers, globe-trotting internationals, and living-the-dream local river guides.

I swapped stories with a badass solo backpacker woman and a ultra running rock climber dude. I gleaned what I could about the local wildlife and mountain trails. When Brenner and Campbell were good to go, we piled into Campbell’s adventure-rig and headed for the hills – or more accurately, the Chisos Mountains. Campbell insists that Day One of each Big Bend trip is a mandatory climbing (in my case, running) of the highest peak in the range.

Emory Peak’s raw, exposed-granite summit, from the end of the hamstring- and glute-punishing singletrack ascent, juts abruptly toward the heavens at an angle seemingly perpendicular to reason necessitating a 35′ hand-climbing scramble to the peak proper. Campbell had summited the peak his first day in Terlingua so he made for the saddle, leaving Brenner and me to make the ascent. 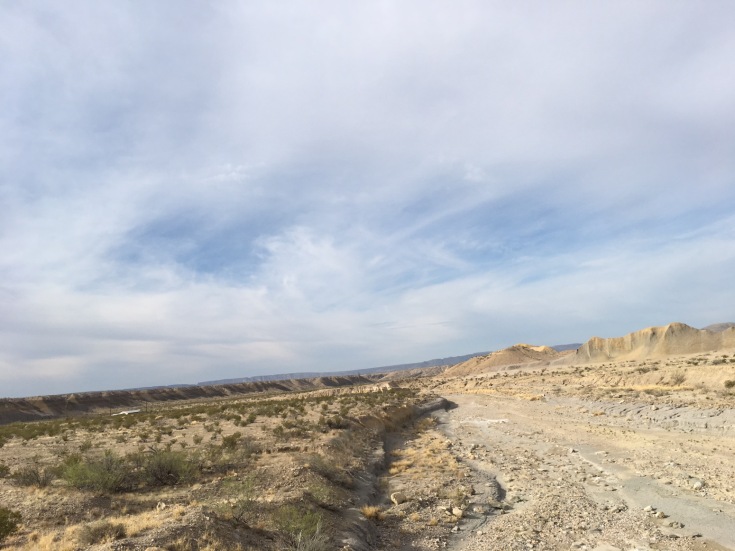 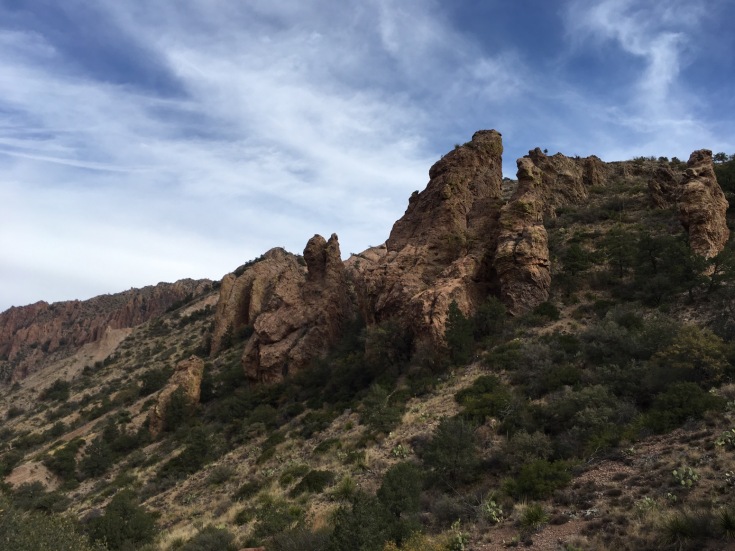 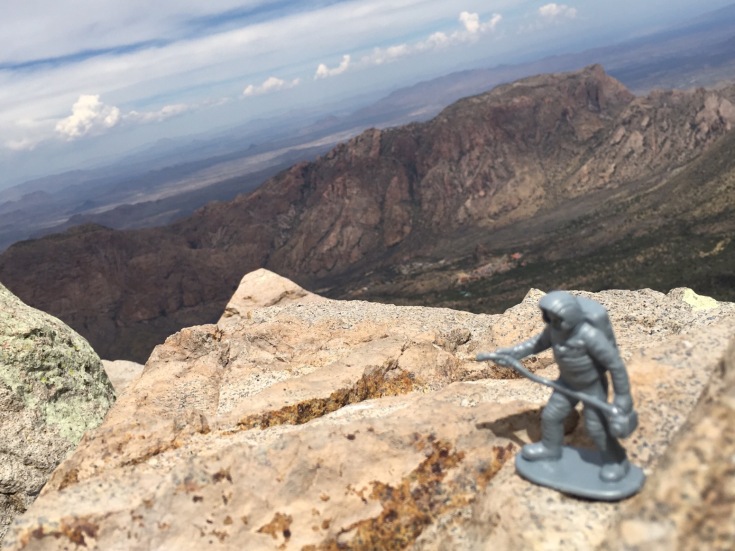 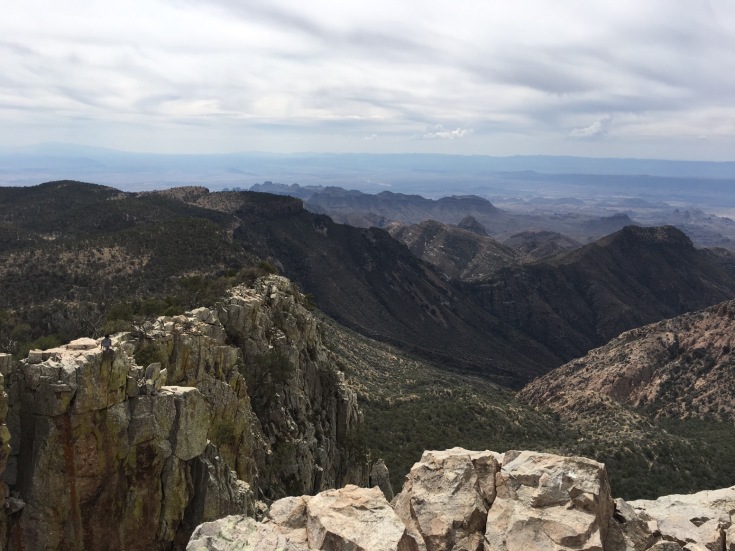 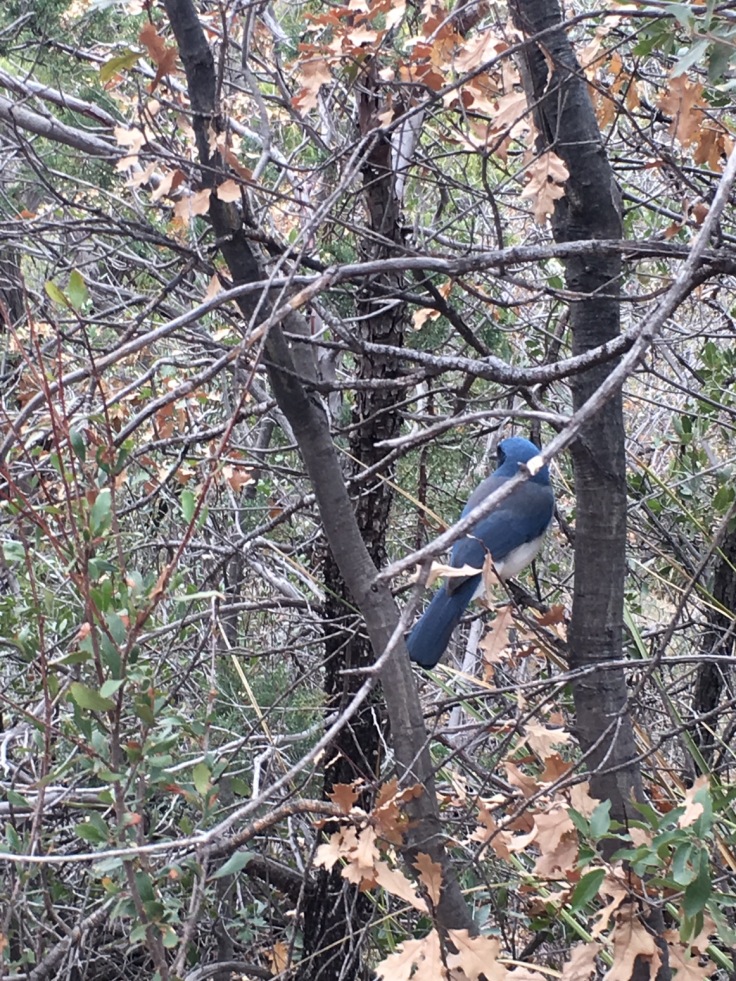 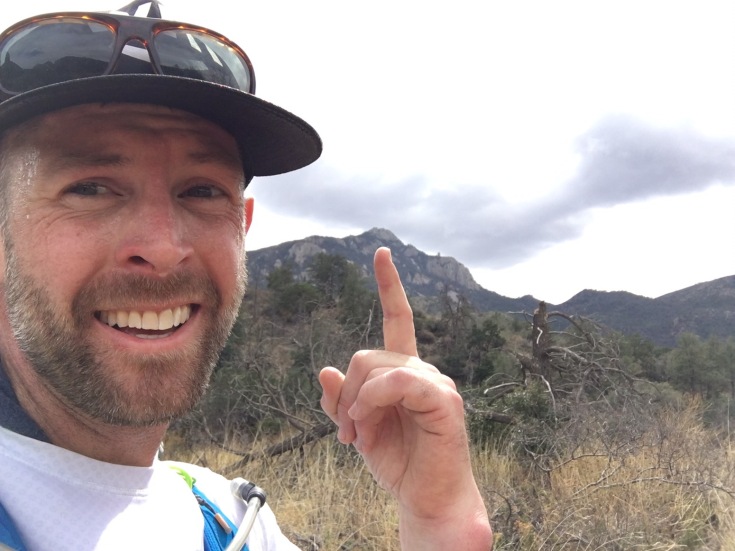 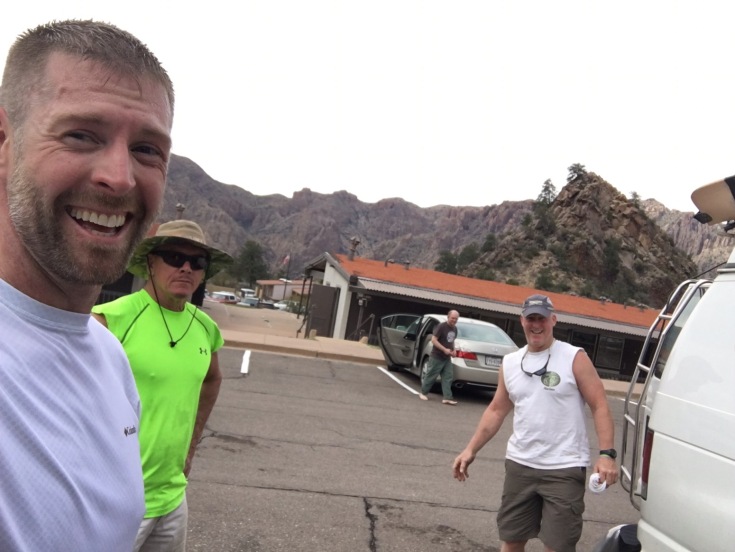 The four and a half mile charge down a bone-shaking 3800-foot descent ended at Campbell’s adventure rig and a jug of cold water. We piled into the van to make for a little hot spring on the Rio. 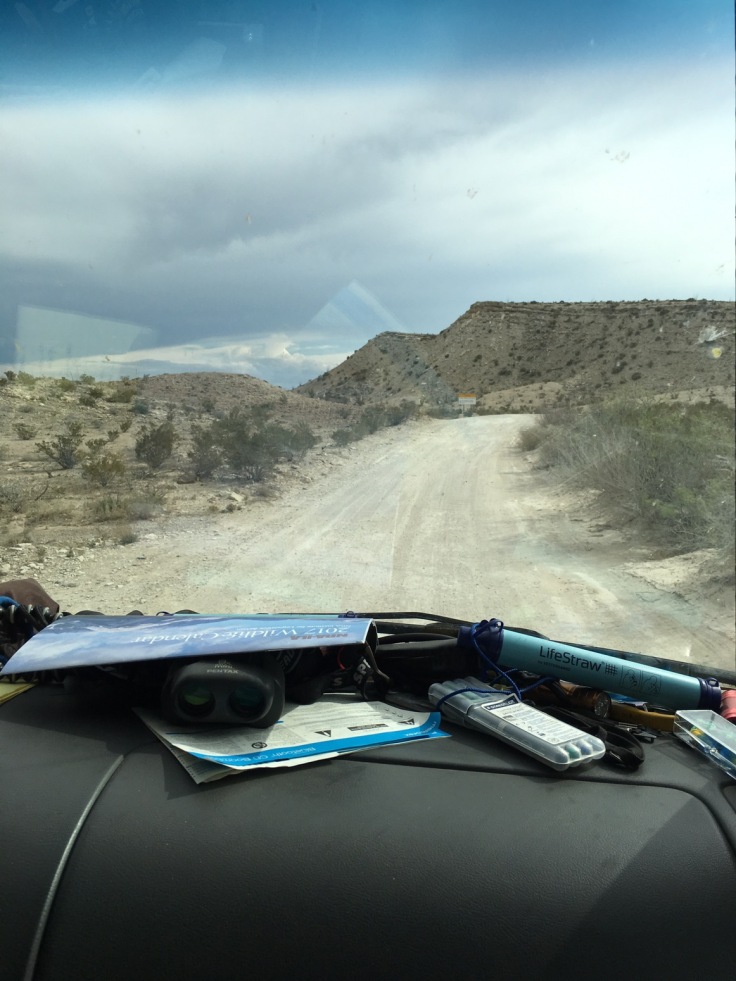 Trinkets made by the crafters across the river. There’s a man in a little hut across the Rio with line-of-sight on the goods. When the path is clear of American National Park docents, he waded across the Rio to collect what cash tourists have left in  his coffee can. 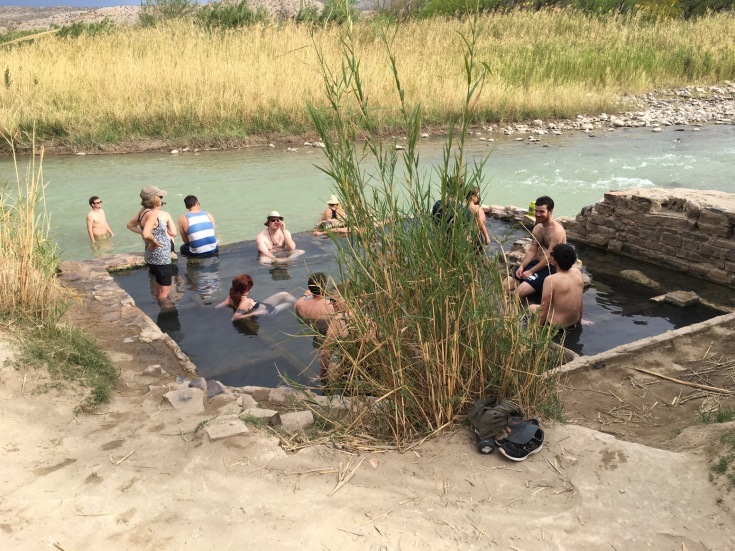 Folks from all over Texas, America, and the World gathered for a rejuvenating soak in the hot spring of Hot Springs, Texas. Situated on the bank of the Rio Grande,a centuries-old stone basin creates a large pool for the hot water (and spring-breakers) to gather.

After soaking an hour or so, the steaming hot water encouraging rejuvenating blood-flow to our extremities, and the fistfull of travelers filling our heads and hearts with tales from around the globe, we were in dire need of caloric replenishment. The path returning to the van seemed twice as long as it did on the approach. My legs were starting to feel heavy – the charge down the mountain was steep and technical, and my quads and glutes are notably weak. By the time we made the hour trip to La Kiva, my right knee was immobile and couldn’t bear weight. Campbell and Brenner sidled up top the bar to treat their afflictions, while. I limped up to the coffee pot to serve myself before retiring to the back porch to get acquainted with an old mongrel sniffing around for scraps. I rolled some Blueberry (from DJ Short’s Original cut). Its Purple Thai genetics crossed with Afghani indicas create a deep, stony body effect without the totally overwhelming couchlock of heavier indica strains.  Dense, deeply pine-green buds are lined with crystals and deep reddish hairs, giving it a darker first impression than most buds, bordering on violet. The smell bursts out of the jar with an aroma of big, sweet, supermarket blueberries, coupled with a spiciness that comes from the presence of caryophyllene, a terpene responsible for the spiciness of black pepper, cloves, and hops. Caryophyllene is also known to have pain relieving, anti-bacterial, anti-cancer, and anti-anxiety properties. As the caffeine and cannabis took simultaneously took effect and my ailments dissipated for the time being, my compadres emerged from the cantina. We loaded back into the van, and headed back to camp. Worried my injuries would prevent me from paddling, I made the call to hit the bedroll early, in hopes of sleeping-off the swelling. 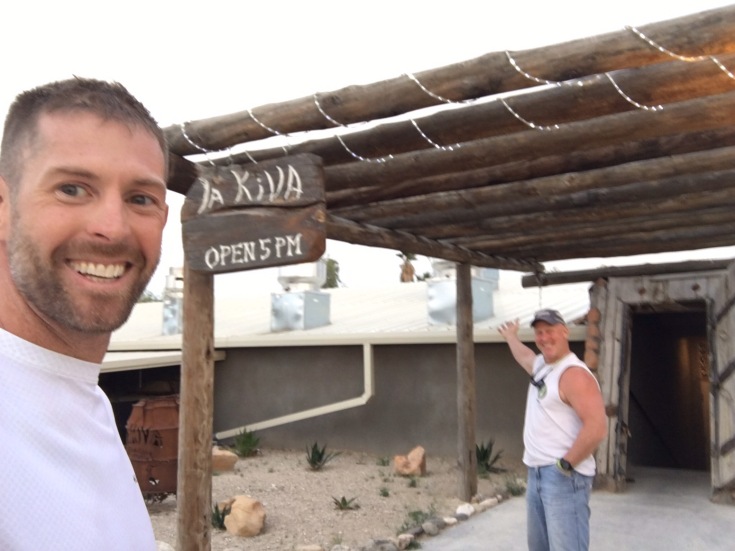 ﻿
After a most uncomfortable night spent rolling around restlessly on the jagged desert sandstone, I admitted to myself and my compatriots that my knee wouldn’t carry me. Campbell and Brenner took to their motorcycles, and I to my Chevy. The Steves derived the majority of their calories from beer. Foolishly, this was not something I considered before striking out onto the road with them, and it quickly became a problem. We started out in Study Butte, stopping at a little taco stand across the two-lane highway was the only grocery market in 100-mile radius. Tacos and cactus beer. Problem solved.

Big Bend Ranch State Park offers rugged mountains, steep canyons, amazing views, unparalleled night skies, and solitude in the high desert. The park stretches along the Rio Grande, on the U.S.-Mexico border. I saw some of the most unique and unforgettable scenery of my travels. 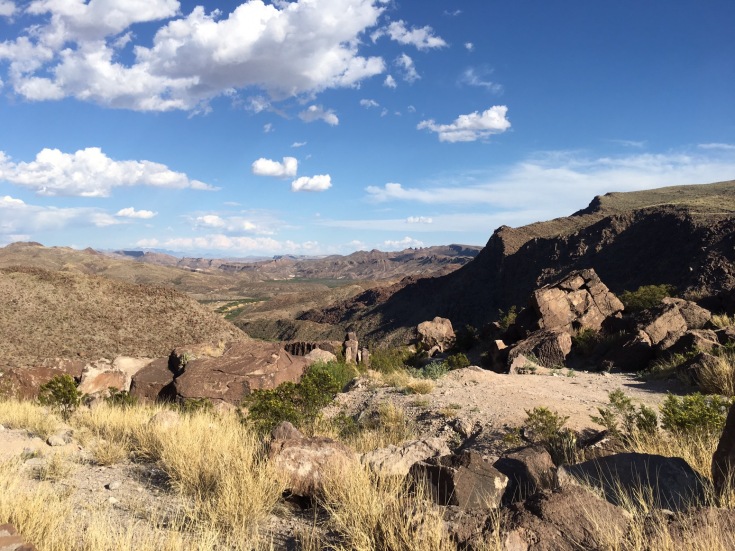 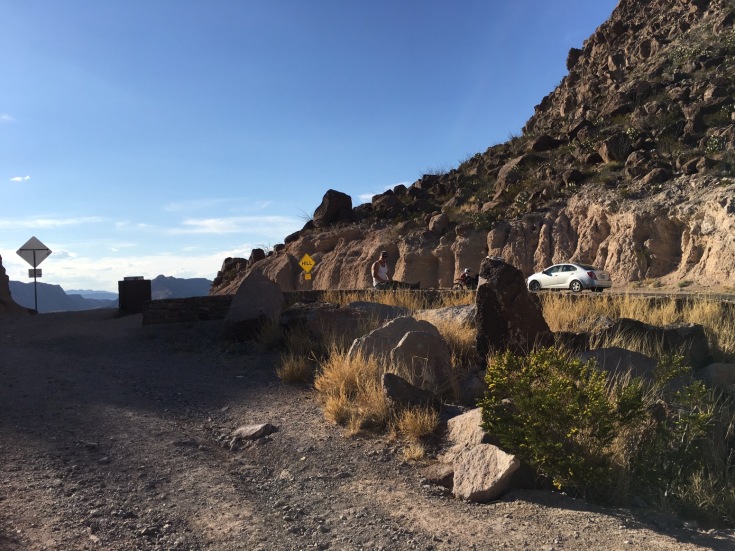 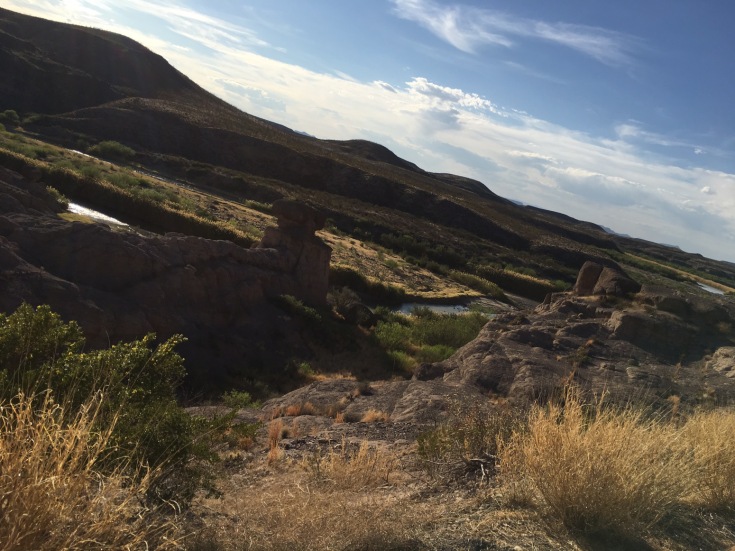 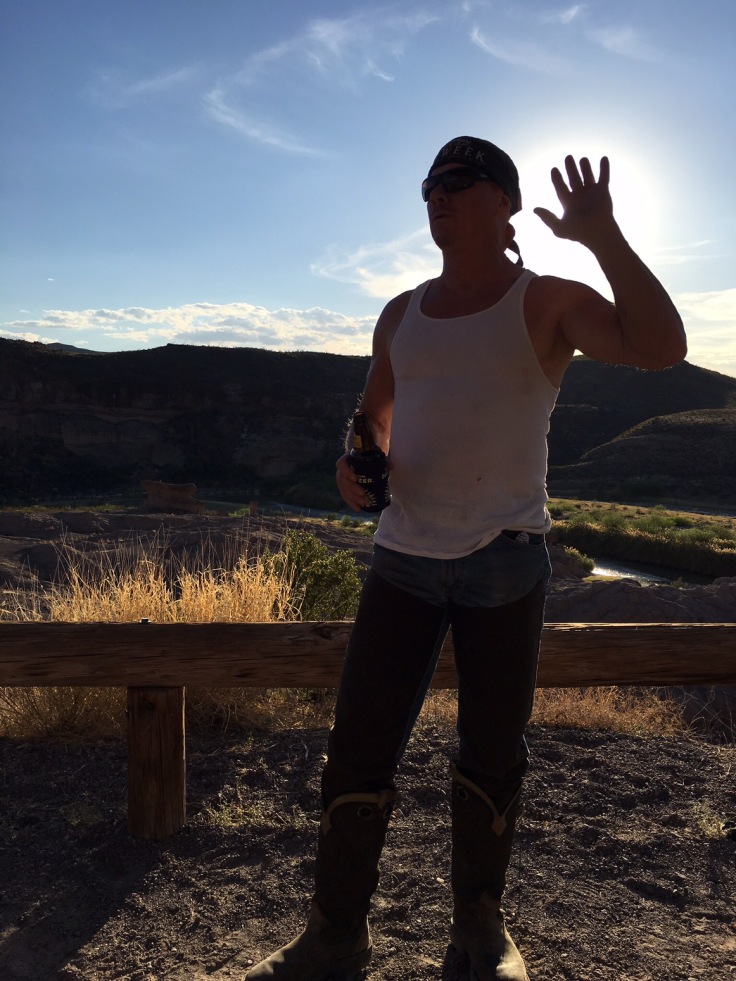 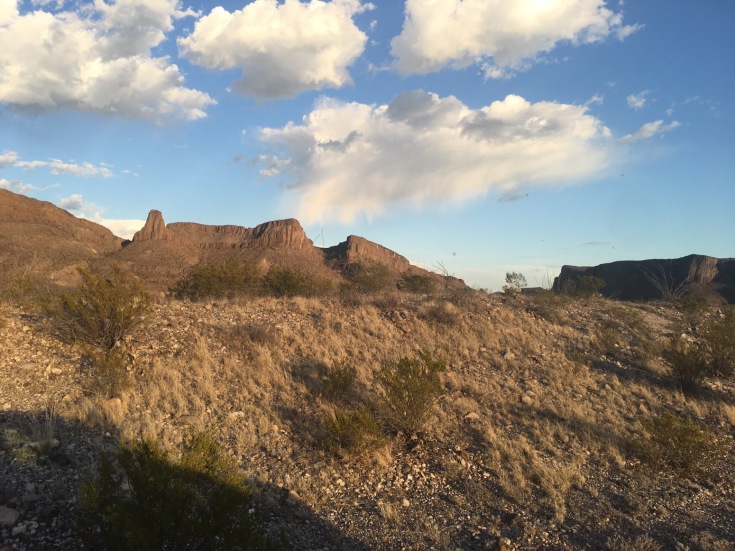 The sun had set on Big Bend, as well as the first leg of my journey to the (B)East Coast. Once we returned to the ghost town Turlingua, and my little four-door Chevy, I would begin my departure from Far West Texas.